In Saskatoon, Canada, a video of a Boston terrier and a frozen tennis ball quickly went viral. People from all over loved watching the ten-year-old terrier try to pick his favorite tennis ball up from the ground. The only problem was, the tennis ball was frozen to the icy pavement. 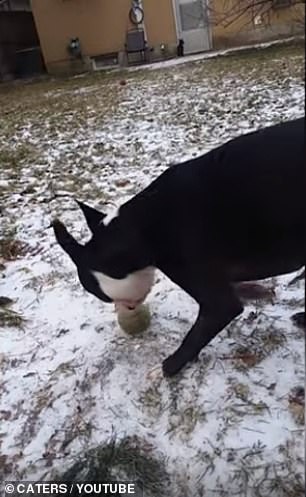 Kimberly Brown, the Boston terrier’s owner, said her dog is a big fan of tennis balls. The terrier, named Manson, has one particular tennis ball that is his favorite. Kimberly has tried replacing it many times with a new ball, but Manson only wants his old treasured ball.

The senior terrier enjoys playing fetch with his prized ball, even when the temperature outside dips below freezing. On November 7, 2019, Saskatoon experienced its first snow of the year. The ground was quickly covered, and Manson had left his favorite tennis ball outside. 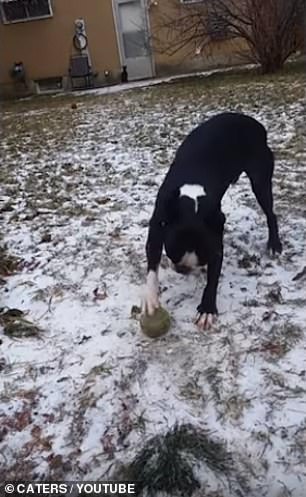 As soon as Kimberly let her Boston terrier outside, Manson knew exactly where his ball was. Brown said every morning, they go out to play a couple of rounds of fetch together. Ready to play, Manson dashed off to retrieve his ball. The terrier was confused when he tried to pick up his ball, and it wouldn’t budge.

Kimberly quickly grabbed her phone and went outside. Her poor dog was frantic. He was digging and pulling at it in a desperate attempt to free the ball. Poor Manson didn’t understand why he couldn’t pick up his ball. Check out the video below:

After Manson failed to free his ball, Kimberly came to her dog’s rescue. After Kimberly dislodged the tennis ball from the frozen ground, Manson went back to playing with it. When playtime was over, Manson decided to bring his beloved ball into the house with him. Kimberly said her dog was not going to risk it freezing again! 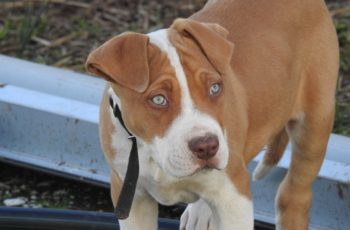 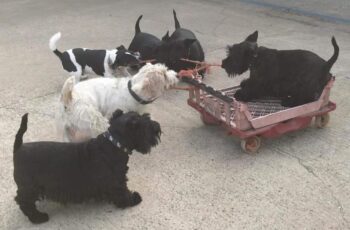